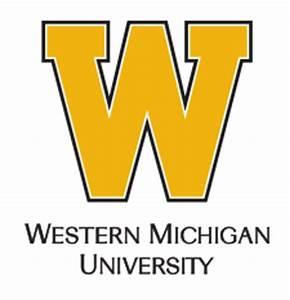 Western Michigan University (WMU) is a public research university in Kalamazoo, Michigan. It was established in 1903 by Dwight B. Waldo. Its enrollment, as of the Fall 2019 semester, was 21,470.[3] It is classified among "R2: Doctoral Universities – High research activity".[5]

The university's athletic teams compete in Division I of the National Collegiate Athletic Association (NCAA) and are known as the Western Michigan Broncos. They compete in the Mid-American Conference for most sports.

On May 27, 1903, Michigan Governor Aaron T. Bliss signed a bill authorizing the creation of the State's fourth teacher-training facility.[6] The three other normal schools were in Ypsilanti (Eastern), Mount Pleasant (Central), and Marquette (Northern). Kalamazoo was chosen as the new school's location on August 28, 1903. Other locations considered included Allegan, Muskegon, Grand Rapids, Decatur, Three Oaks, and Hastings. The first building, then known as the Administration Building, and now known as East Hall, was constructed in 1904.[7]

Most of the oldest and original WMU buildings and "classrooms" are collectively known as East Campus, directly East from the more central "West Campus".

Access to the East Campus site was an issue because of the steep grade elevating it above the city. The Western State Normal Railroad was established in 1907 to carry students and staff up and down the hill via a funicular. It operated until 1949.[8]

Western Michigan University was negatively impacted by the COVID-19 pandemic. Giving remarks at a WMU board of trustees meeting on April 23, 2020, President Edward Montgomery stated "The COVID-19 pandemic has also transformed higher education and our University in ways that few of us could have imagined". He went on to state "the crisis has already cost WMU well over $45 million, and we expect the tally to rise through the remainder of this fiscal year". To soften the economic toll of the pandemic, WMU instituted a number of cost-cutting measures. Montgomery stated he was personally taking a 10% pay cut and there would be pay cuts between 5%–10% for other WMU executives. Montgomery stated these cuts will save WMU "approximately $1 million".